$149.95 Buy It Now
Table of Contents:
When you need a reliable 4 stroke engine to build a motorized bike, it's a good idea to select the product from reputable brands and ensure it's within budget. Browse this list of 4 stroke engine kits from popular companies offered through different merchants so that you can compare & save!
Editor March 7, 2022 263 0
SaveSavedRemoved 0

Motorized bicycles can have two types of engines: 2 strokes and 4 strokes. Two stroke motorized bicycle kits are simpler and are a little less bulky than 4 stroke kits. However, many favor 4 strokes because of the valves present & extra torque/power you get. How 4 stroke engines work is simple: when the engine operates, the pistons go through their cycle to produce movement for your motorized bike. This is caused by the downward and upward motion of the pistons. After the 4 events (intake, compression, power & exhaust) are complete, it begins again. Bottomline is compared to 2 stroke engines, these kits offer better efficiency, reliability, power, and balance. They also separate the fuel from oil by providing a reservoir so that oil doesn’t need to be added as frequently compared to a 2 stroke engine. These features, among others, make 4 stroke bicycle engines kit very popular. If you’re searching for a long-lasting, reliable, and tough engine kit for your bicycle then this particular 4 Stroke Bicycle Engine Kit should be among your list of options. This is an all-new version of the 49cc BBR Tuning 4-stroke bicycle engine kit that has pull start and clutch features, with the latest facilities like upgraded components and so on. This brand is a popular choice when it comes to quality motorized bike kits and is one of the most well known. One interesting feature is the killswitch that allows you to easily turn the engine off in addition to a separate oil reservoir. These features, among others, comprises the many reasons this brand is a customer favorite. And with it being a 4 stroke engine, it’ll cause less emissions as unburnt oil in a 2 stroke engine is removed via the exhaust. Additionally, there’s a centrifugal clutch, which will allow you to start the bike without pedaling. To start your bike, all you need to do is pull the cord and press the throttle and then you’re off. When your bike is at rest, the engine will stop automatically. This package is perfect for bikers looking for an efficient and reliable 4 stroke engine.

The BBR Tuning 49cc 5G Lock-N-Load offers another option for simple motorization of your bicycle. Dissimilar from other models of motorized bike kits, which usually mount the middle of the vehicle frame; this kit mounts the motor straight over the wheel and this gives more options you can use this product on. This engine mounts over the wheel of the bicycle and for this, you won’t have to fix a rear drive sprocket. The direct friction from the driveshaft mount will pull on the wheel while creating friction against the propel and the tire. Also, you’ll get a complete digital installation guide with this 4 stroke bicycle engine kit. So when you need a motor for your bike then you can consider this product.

Features of the engine: Motorization of your bike will be a lot easier with the BBR Tuning 38cc Lock-N-Load Friction Drive Bicycle Engine Kit . Again, this item, like the previous model, mounts the motor straight over the wheel giving you more biking options this product can be installed on. Also, no rear drive sprocket will be necessary. Of course, the main difference is that this kit is a 38cc whereas the previous model is a 49cc. Are you ready to turn the old bike into a superstar? With this engine kit, that’s possible. This is a 79cc 4 stroke engine and it’ll turn your old bike into a super fast & reliable form of transportation. As you know, the 4 stroke is the most powerful system in the market, so this one may truly be an upgrade for your bicycle. This system is known for both its torque and speed. You can get speeds like 35 mph which is quite fast. Also, the centrifugal clutch removes the manual handling of the clutch when changing speeds (ideal for when encountering multiple stop signs). This makes riding your motorized bike a lot easier. Finally, you won’t have to worry about the cost of upgrading as this version is self-sufficient enough to provide dependable transportation for the long haul.

Features of this motor: The ANBULL Motorized Bicycle kit has both 28 to 40 mm frame tubes. You will not get the installation, but this is recommended for professionals. This is a 4 stroke engine and has received decent ratings from purchasers. Also, the manufacturer claims the engine sound is quieter than other versions of four strokes. This one may provide a decent alternative when deciding to upgrade from a regular bicycle to a motorized one. With this system, you can enhance your riding experiences.

Features of this engine: 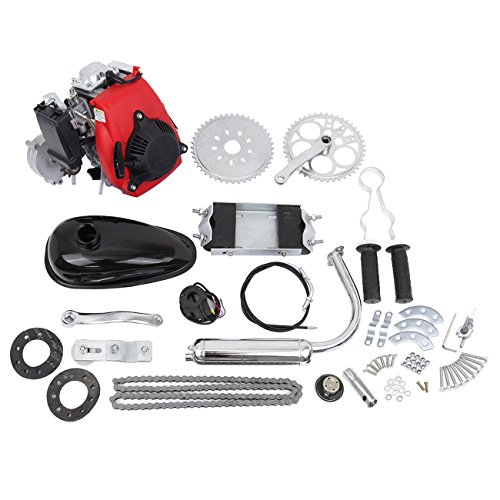 Check it Out
Amazon.com

The MOTOOS 49cc kit is a pull start kit and a quieter and reliable product than the other items. You’ll get everything in the package, just oil is missing from the kit. You can always stop and start the engine whenever you wish, and it should run perfectly on the first go, and you will not require any kind of adjustments. You’ll get an in-line and tank gas filter in the kit. You will also get a faster delivery once you order it and the engine will run speedily according to customer reviews.

Features of the engine: The Flying Horse Complete 5G 4-Stroke Bicycle Engine Transmission Kit is compatible with almost all Huasheng 142F 4-Stroke Engine kits, Grubee 4-stroke kits & of course the Flying Horse 5G engine kit. This product will allow you to either rebuild your 4 stroke motorize bike or give you a chance to make use of a 4 stroke engine that’s been on the shelf. Some items you’ll get in the package include a wide crank assembly (no bottom bracket), a black chain guard & a 4 stroke mounting plate. You’ll also get a 44 tooth sprocket, a new transmission, chain idler, sprocket clamp assembly, and so on. Additionally, you’ll receive a four-stroke muffler and a throttle grip as well as a killswitch set. This is a decent choice for professionals and new users alike. Novices can check the manual for the installation and once it’s complete, you’ll have a functioning 4 stroke motorized bike.

Features of this transmission kit:.

The 4 stroke system has a universal fit and once you replace the old one with the new one, you’re ready to hit the road with your motorized bike. You’ll get a heavy-duty chain with a mounting plate which will help you install the motor easily. You can easily choose from this list of 4 stroke bicycle engine packages, and you’ll find the one you need for your bike. Make sure to compare the prices of the kits and then go for the one that suits your needs best.

The 2-stroke engine gets its power by mixing fuel and air in the crankcase and then igniting it. The piston compresses both fuel & air while the spark plug ignites it, causing the piston to move down and the crankshaft to turn. As the piston moves up, it draws in new fuel and air charge, and the process starts over.

2-stroke engines are simpler than 4-stroke engines because they don’t have valves or camshafts. This also makes them lighter and less expensive to build. 2-strokes usually require more maintenance, however, because the engine oil is mixed with the fuel and burned. This can cause the oil to thin out and not lubricate the engine adequately.

4-stroke engines get their power by compressing the air/fuel mixture in the cylinders and then igniting it with a spark plug. The spark plug fires once for every two crankshaft revolutions, so there are two sparks per cycle. 2 strokes are needed to complete the intake and exhaust phases, while 2 more strokes are needed for the combustion and power phase.

About Us
Welcome to BicyclesOutback.net! This site’s purpose is to assist customers in finding the best price for a variety of biking products. Comparison shop & save on costs for the bike you want!